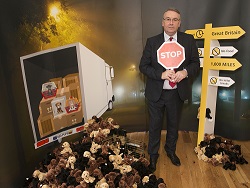 Dogs Trust has warned that although there is a rise in puppies illegally imported during the festive season, illegally imported puppies is a huge issue all year round. The organisation has issued advice to help anyone thinking of buying a puppy, to know what to look for, in a bid to stop buyers unwittingly fuelling the trade. The charity has also issued a plea to anyone thinking of getting a dog, to do their research or consider rehoming instead.

Alan said I’m very pleased to support Dogs Trust in raising awareness of the plight of illegally imported puppies, who suffer the most harrowing of journeys at the hands of these unscrupulous dealers. It’s imperative that the Government takes immediate action by enforcing proper checks at the ports and on-the-spot fines to deter these breeders and dealers, as well as introducing revised legislation as a priority when the UK leaves the EU. We really hope this will help to effectively regulate pet travel.”