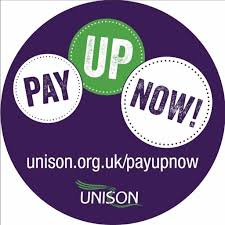 Tynemouth MP Alan Campbell has written to the Chancellor to demand a meaningful pay rise for public sector workers.

The large number of letters and emails I have received on this issue highlights the strength of public opinion and I’m happy to be supporting Unison’s ‘Pay Up Now’ campaign.

I have written to the Chancellor to take immediate action and award public sector workers – many of whom have borne the brunt of austerity – the pay rise they deserve.”