Rally to save Whitley Bay Jobcentre 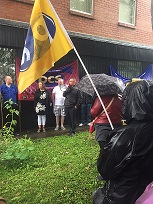 Tynemouth MP this morning joined staff and residents in Whitley Bay at a rally to protest against the government’s decision to close Whitley Bay Jobcentre.

The Whitley Bay closure has been rushed through following the announcement to close being made on 6th July, staff were told the following week that the jobcentre will close its doors for the final time on 18th August.

The decision has been attacked by local MP Alan Campbell who has called on the government to reconsider the decision to close it and the undue haste with which the closure is anticipated.  Alan Campbell said “In March of this year I warned the Minister about the shortcomings of this plan both for claimants, staff and the wider community.  Hundreds of people across the community signed a petition and the campaign was highlighted in the News Guardian.  Far from considering the arguments including taking a vital service out of the town we’re all working so hard to regenerate the government has ploughed on with its closure plan.  I strongly urge the government to reconsider this decision.”