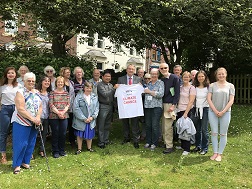 Alan joined Prof David Golding and campaigners in Cullercoats this afternoon at the start of an event to mark the Climate Coalition’s ‘Speak Up!’ national week of action.

The Speak Up week of action is organised by The Climate Coalition and its members and is the UK’s largest group of people dedicated to action on climate change and limiting its impact on the world’s poorest communities.

Alan said “I’m a big supporter of the Climate Coalition.  Climate Change is one of the biggest issues for our times both here and abroad.  David’s tireless efforts go a long way to keep climate change on the agenda here in the North East.”