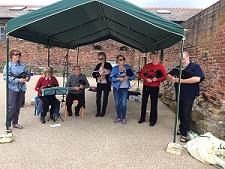 Alan Campbell said “The Fishermen’s Mission does a great job supporting local fishermen and their families but also those who visit our port from elsewhere. It was an honour to officially open this years’ Mission Aid and I’d like to thank Superintendent Peter Dade who is also reaching a milestone later this year, celebrating 25 years service at the Mission.”