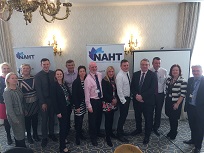 I recently met with Headteachers from across the borough to discuss local concerns about cuts to school funding.

Spending per pupil in North Tyneside is already projected to be £1500 less than the average London borough by 2017-18.  Further changes to the National Fair Funding Formula are set to take a further 2.7% from school budgets before schools have to pay the cost of pay rises, pensions and NIC changes.

Schools with big sixth forms will be hit harder as they struggle to cope with cuts to Post 16 funding.  The cuts will mean fewer staff, less buildings maintenance or a reduced curriculum or most likely all of them.  North East Schools would need £323 million to match London levels yet the Chancellor set aside £360 million for unnecessary grammar or free schools.  I’ve already raised my concerns with Ministers and will continue to do all I can to oppose these unfair cuts.