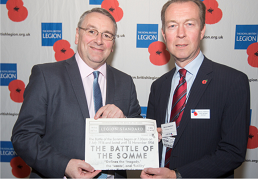 The Royal British Legion is the country’s largest Armed Forces charity, providing welfare assistance to many thousands of veterans, serving personnel and their families. It is also the national custodian of Remembrance, best known for its emblem the red poppy. Alan attended the Legion’s event in Parliament to show his support for the charity’s work, and to meet with local area manager Marcus Hawthorn to discuss issues facing the Armed Forces community, as well as plans to commemorate the centenary of the Battle of the Somme.

Marcus Hawthorn, the Legion’s Northern area manager, said “I was delighted to see Alan and we were grateful that he took the time to drop in. The Royal British Legion offers a range of welfare support all year round, and last year we answered over 450,000 calls for help. This event offered a great opportunity to spread the word about the range of services that we provide, and discuss our plans for the centenary commemorations of the Battle of the Somme. It was a pleasure to meet with Alan and I look forward to working with him on Armed Forces issues”.

Alan Campbell added, “I enjoyed meeting staff from The Royal British Legion and learning more about the work being done in my local area. Members of the Armed Forces community make huge sacrifices in the service of our country, and I am proud to support the work of the Legion in honouring the memory of the fallen and building a better future for the living.”