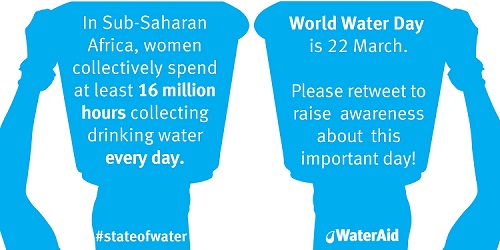 Local MP Alan Campbell is supporting World Water Day which is held annually ‘as a means of focusing attention on the importance of freshwater and advocating for the sustainable management of freshwater resources’. An international day to celebrate World Water Day was recommended at the 1992 United Nations Conference on Environment and Development (UNCED) and the UN General Assembly designated 22 March 1993 as the first World Water Day.

Alan Campbell said “In recent years there has been real progress in reducing the number of people in developing countries that do not have access to clean water or sanitation. However, as WaterAid’s ‘Everyone, Everywhere’ report reminds us, 11% of the world’s global population – 783 million people – remain without access to an improved source of drinking water and the UN estimate that 2.5 billion people in developing countries still lack access to improved sanitation facilities.

The Millennium Development Goals have provided huge momentum in addressing some of the most pressing challenges facing developing countries but it is clear that further progress is needed including on the key issue of improving access to clean water and sanitation.”