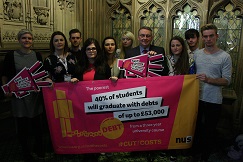 Local MP Alan Campbell today met with representatives from the NUS at an event in Parliament to campaign against plans to scrap maintenance grants.

The Government plans to scrap maintenance grants for students from poorer backgrounds, replacing them with additional loans.

This will mean that the poorest 40% of students going to university in England will graduate with debts of up to £53,000 from a three-year course. It will impact on students studying at further education colleges, and will especially affect those from BME and Muslim backgrounds, disabled learners, female students and older people.

Alan Campbell MP said “The Government attempted to force through the sweeping changes -; which were not in the Conservative election manifesto – last week in committee, hidden away from public scrutiny, rather than on the floor of the House of Commons.

The Government should be doing all it can to ensure that those from the poorest backgrounds reach their full potential. This change would do the opposite, and could make poorer students think twice about going into higher education due to the considerable debts they will acquire in the process.

I voted for an Opposition motion, which called on the Government to abandon its policy on replacing maintenance grants with loans for lower income students, and I voted for a subsequent motion to annul the statutory instrument in which these changes are contained, but the Government opposed the motions and they were defeated.”